2)     A typical tire crumb field also includes hundreds of tons of inhalable & ingestible particles made from chemicals known to; be toxic, cause birth defects, and/or cause reproductive harm (c) -- including lead. (d)


3)     Children and young adults are the groups most frequently, repeatedly exposed to the chemicals found in tire crumb synthetic turf. (e) 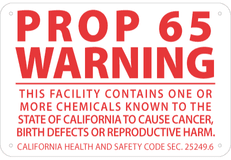 The current Federal, (Trump), administration threatens to destabilize the very government agencies responsible for protecting children's health.
In California, smoking tobacco products is prohibited within 250 feet of a youth sports activity, (a measure which was decisively passed by CA Senate Bill 977). Yet today, very few California parents are even aware of the health risks associated with tire crumb chemicals.
Parents will continue to unintentionally expose their children to a significant toxic chemical risk, which is possibly not of their choosing, until California requires the posting of warning signs at the entrance of tire crumb fields.
​
​Explanatory Footnotes
(a)          OEHHA is the California Office of Environmental Health Hazard Assessment which is a department within the California Environmental Protection Agency (Cal/EPA) -- with responsibility for evaluating health risks from environmental chemical contaminants. CalRecycle is the California Department of Resources Recycling and Recovery.
In 2016 OEHHA convened a scientific advisory panel to provide advice on a multiyear study.

(b)          OEHHA reports that over 38% of the material found in tire crumb is "known to cause cancer" – which includes the petroleum derivative, carbon black, (listed as a Prop 65 chemical in 2003) .
(Carbon black should not be confused with nontoxic materials such as activated charcoal or graphite.)
The carbon black used in tires is a material that is produced by the incomplete combustion of a variety of heavy petroleum products. The specific sources for carbon black chemicals are not standardized -- they can include;
The carbon black is introduced into the tire manufacturing process in a microscopic nano-particulate form. Waste tires are ground into tire crumb particles that range in size from respirable microscopic particulates to approximately the size of a grain of sand. Despite the addition of additional chemicals for vulcanization -- the tire crumb continues to be broken down on the fields by trampling, weathering, etc.
​(c)           Individual measurements for chemicals found in tire crumb samples vary. OEHHA reports variability in reported samples differing by as much as 75 times. The precise chemical makeup of each tire is considered proprietary information, (industry secrets). No government agency requires tire manufacturers to divulge the exact chemical makeup of the ingredients used in their products.
Additionally, the chemical recipes or chemical makeup of tire models tend to shift and change throughout the years. Each tire has an individual country of origin -- involving hundreds of manufacturing factories throughout the world. (Determining the countries of origin of each of the worn waste tires used on a tire crumb field, from their imprinted codes, is not possible.)

​(d)          It is generally accepted that no level for lead exposure to humans is considered safe. The lead found in tire crumb is in addition to, and should not to be confused with, the lead found in the plastic synthetic turf -- about which the State of California sued the manufacturers and won in 2008.

(e)          Children have been found to be especially susceptible, and vulnerable to chemical uptake and its potential life-long impacts. Accumulation of chemicals through daily exposures is problematic. By design, users of tire crumb synthetic fields come in direct contact with the particles -- and both users and spectators at the fields can intake the particles through multiple pathways simultaneously. Exposure routes include inhalation, ingestion, dermal uptake, and directly into the bloodstream through open cuts and wounds. The ingested chemicals can accumulate and have a prolonged half-life within the body.

​Only inconclusive data can be expected from the sampling of a highly variable material, (like tire crumb). Especially when the samples amount to only grams, (or smaller), taken from a massive sampled source that is in the tons, which has been spread out over what amounts to, (literally), football fields – found in thousands of outdoor installations across California.

​1) The majority of users of tire crumb fields tend to be youth or children. Children have been found to be especially susceptible to chemical uptake and their potential life-long impacts. Accumulation of chemicals through daily exposures is common. By design, users of tire crumb synthetic fields come in direct contact with the particles -- and both users and spectators at the fields can intake the particles through multiple pathways simultaneously. (b)
2) The average sized tire crumb field contains hundreds of tons of inhalable material containing chemicals known to; be toxic, cause birth defects, cause reproductive harm, and/or cause cancer. (c) Tire crumb samples have also consistently been found to contain lead. (d)
​3) Over 38% of tire crumb is composed material -- that is "known to cause cancer" by the State of California. (e)
​​   Would Californians care if they knew? For context, in 2016, Californians voted to prohibit smoking tobacco products within 250 feet of a youth sports activity, (Senate Bill 977).
Every day that California fails to follow its mandate of enabling parents to make an informed choice about chemical exposures for their children by simply posting a sign -- most parents will continue to unwittingly put their children at risk, or in a situation that is not of their choosing.
Powered by